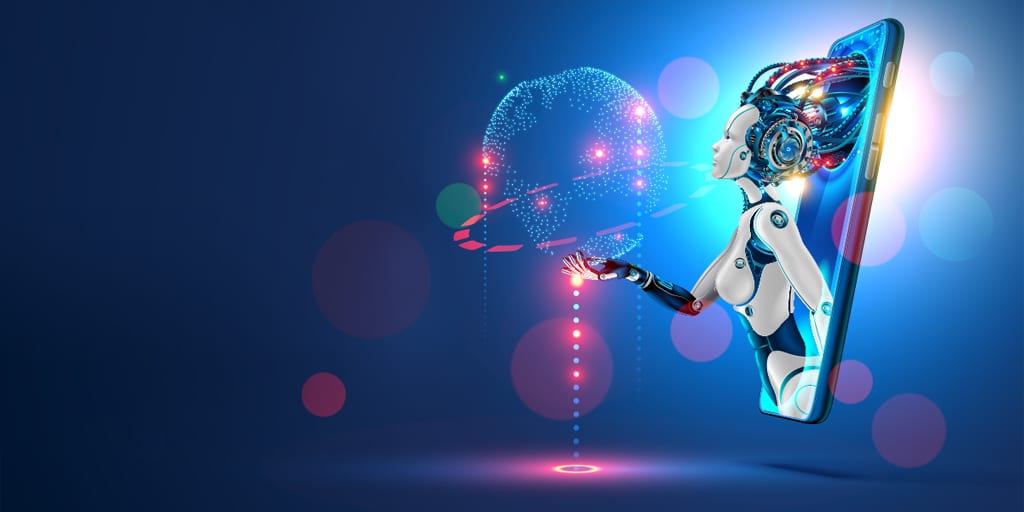 Some of the benefits of artificial intelligence in mobile application development are listed as follows:

People will be annoyed by performing the same work repeatedly. Al makes a relief for that by making the tedious work quick and fast. With the careful automation AI can work for a long time with decrease in their capacity to be productive. By reducing these types of tiresome works the people and these apps can concentrate on more significant tasks.

The app development process includes highly complex and logical numbers. Thus a small error in this would affect the whole process of developing. With the help of AI in this, there will be low chances of getting the mistakes the output will be in utmost accuracy and precision.

3. EASY USE OF CROSS PLATFORM

Mobile application requires coding and designing by one or more people. With the use of AI all these can be done. AI has made all these with the development tools and this allows a person to learn the methodologies to develop a mobile app with little awareness.

There are areas on earth which are difficult for the humans to explore. Ocean surface is such an area where human cannot explore because of the pressure in the surface. AI helps to withstand this. Intelligent robots made with specific materials can be used to overcome this pressure and explore these regions.

Automated reasoning helps to solve problems within a short period of time. For example, taxi app uses AI to find the shortest routes to drop down the customers. It can be done by the algorithm that gathers data from other cab drivers who have travelled in the similar routes.

AI in mobile app helps to understand and identify human behavior pattern. Natural Programming Language (NPL) with the combination of Machine Language (ML) makes better interaction according to the user preferences. For example YouTube, Netflix etc. gathers data about the users past behavior based on their searches and if put forward recommendations for them.

USAGE OF AI IN MOBILE APPS

Some of the usages of AI in mobile apps are:

AI in mobile helps to automatically and accurately recognize human speech. For example, Siri in iOS recognizes the human sound and helps them by reverting with the accurate response for their enquiries.

Chatbots also respond to human enquiries. They depend on machine learning and Natural Language Programming (NLP). Chatbots can store the enquiries even though it went online and reply back when it back to online.

Biometrics is a technology used in AI which helps to identify and analyze the human behavior, physical aspects such as shape of the body via working with images, sensory recognition, voice recognition etc.

Cortana carry out many activities including scheduling meetings, sending emails etc. It records favorite aspects of the users and update with relevant information about the same. It also responds to the users with answers according to their queries. This app can also be used on android.

This app is mainly designed for the visually impaired person. It has the ability to identify three objects at a single second. The app can be able to see and think according to the user preferences.

Replika is a messaging app in iOS platform. It acts like a human for the user rather than the bot by replying to the user questions. It helps the users to find how they sound in messages to others. It also listens to the users voice recordings and responds to it. This app also works on android.

Google Allo is a voice based messaging app where users can send messages via recording their voices. It also converts voice to text according to the convenience of the users. It also helps the users to express their emotions and feelings through emojis and stickers. It hides the search history using the incognito mode.

Robin is another AI app used on android devices. It is another messaging app via voice. It reduces the work of actual typing and helps the users to compose text messages. It includes the GPS navigation. It updates the user with information on traffic signals, twitter news, weather forecast and also even helps to find a parking place.

Siftr Magic is another AI app used on android device. It helps to identify the junk photos in the device that they believe not important to the users. It helps the users to reduce the space in the device.

Send Us A Message

Give us a call

We use cookies to ensure that we give you the best experience on our website. If you continue to use this site we will assume that you are happy with it.Ok